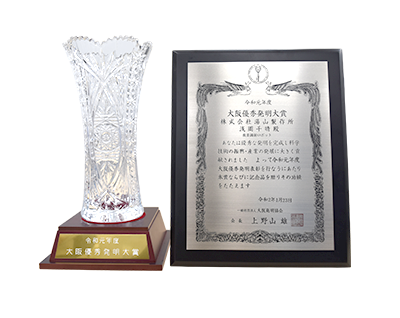 Our Powder Drug Dispensing Robot has been nominated for the 2019 Osaka Excellent Invention Award (Grand Prize) hosted by the Osaka Institute of Invention and Innovation. 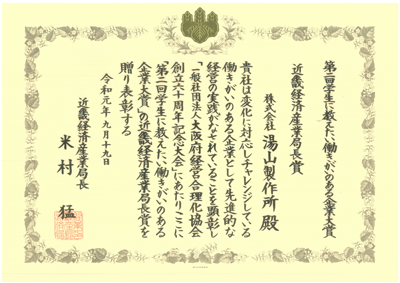 "The Second Best Companies to Work for that You Wish to Tell Students About” Contest (Grand Prize)
Awarded with the Kansai Bureau of Economy, Trade and Industry Director Award

We were awarded the grand prize in “The Second Best Companies to Work for that You Wish to Tell Students About” Contest (Kansai Bureau of Economy, Trade and Industry Director Award) hosted by the Osaka Institute of Invention and Innovation. 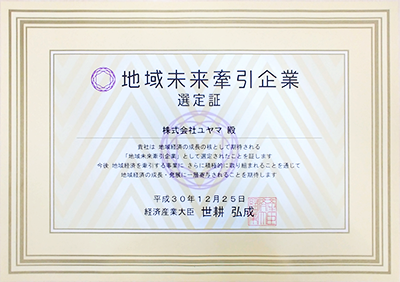 Selected as a “Driving Company for Regional Future”

YUYAMA CO., LTD. was selected by the Ministry of Economy, Trade and Industry as a “driving company for regional future.”
A company that drives a regional future is expected to proactively promote businesses that further uproot the economic growth of a particular region by taking advantage of regional characteristics to produce high added value, and create an economic ripple effect on regional businesses and individuals. 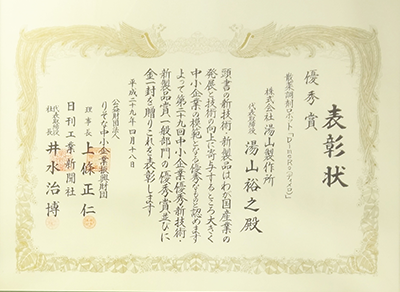 Our powder drug dispensing robot, "DimeRo,” was awarded with the Excellence Award (general category), which was co-sponsored by Resona Foundation for Small and Medium Enterprise Promotion, and Nikkan Kogyo Shimbun, and sponsored by Ministry of Economy, Trade and Industry, and Small and Medium Enterprise Agency.
Details of Award-Winning Product, 【DimeRo】 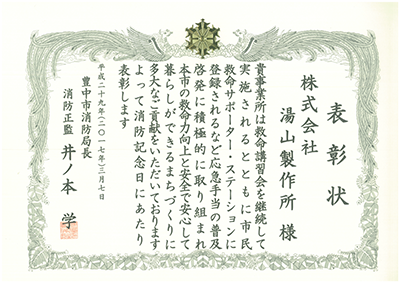 We were awarded by the Toyonaka Fire Department in Osaka for continuously implementing life-saving classes, proactively raising awareness of the importance of first-aid treatment, and contributing to Toyonaka City’s efforts to create a “safe and reliable city.” 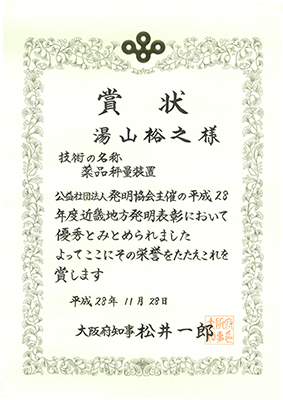 The Japan Institute of Invention and Innovation awarded us with the Osaka Prefecture Governor Award for successfully creating superior inventions in the regions. 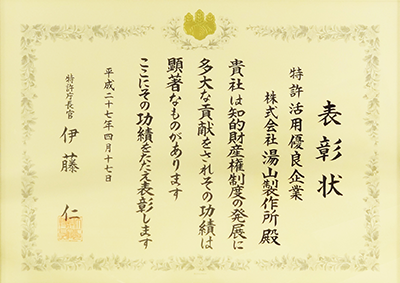 YUYAMA MANUFACTURING CO., LTD. was awarded with the Intellectual Property Achievement Award under a system that annually commends corporations and individuals who effectively implement an IP strategy, and in which a commendation is provided by both the Minister of Economy, Trade and Industry and Commissioner of the Patent Office. 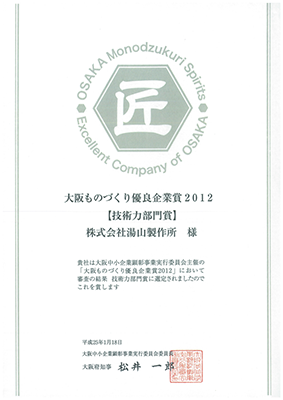 Selected as an excellent manufacturing SME in Osaka, and received the Technology Division Award. 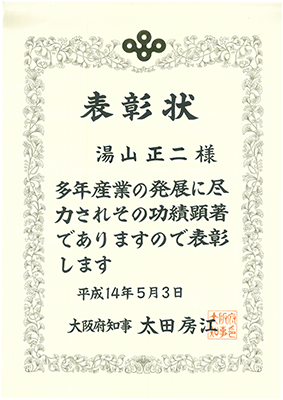 Awarded with “Osaka Industry Merit Award” as a company that contributed to the industrial development of Osaka.